How Does an Oxygen Concentrator Work?

Oxygen concentrators are medical devices that assist people who have a low level of oxygen in their blood. They are powered by plugging the device into an electrical outlet or by using a battery. If a battery is used, then it will need to be charged by plugging it into an electrical outlet. Most concentrators also come with an adapter so you can use the device while you drive.

An oxygen concentrator receives air, purifies it, and then distributes the newly formed air. Before it goes into the concentrator, air is made up of 80 percent nitrogen and 20 percent oxygen. An oxygen concentrator uses that air then it comes out as 90 to 95 percent pure oxygen and 5 to 10 percent nitrogen. The nitrogen is separated to give the patient the highest dose of oxygen possible, as it is difficult to get that percentage of oxygen without the help of a medical device.

1. Takes air from the room.
2. Compresses the oxygen.
3. Takes out nitrogen from the air.
4. Adjusts the way the air is delivered.
5. Delivers the purified air.

How an Oxygen Concentrator Works - Turning Air into Oxygen

There are many parts that make up a portable oxygen concentrator. A compressor and sieve bed filter are a couple of the main parts. The compressor compresses air that is filtered into the concentrator, then delivers the air in a continuous stream.

The drop in pressure from the first sieve bed and the weakening of oxygen makes the Zeolite release nitrogen. The Oxygen and Nitrogen come back together and are released in the room as regular air. The air is then compressed and sent to the second sieve where Oxygen is moved through it to the Product Tank. The whole cycle starts over again with the first sieve after a few seconds.

Other important parts are the cooling system that keeps the portable oxygen concentrator from overheating, and the nasal cannula that delivers the purified oxygen after the oxygen has been passed through all the sieve bed filters. The cannula helps improve oxygen absorption. 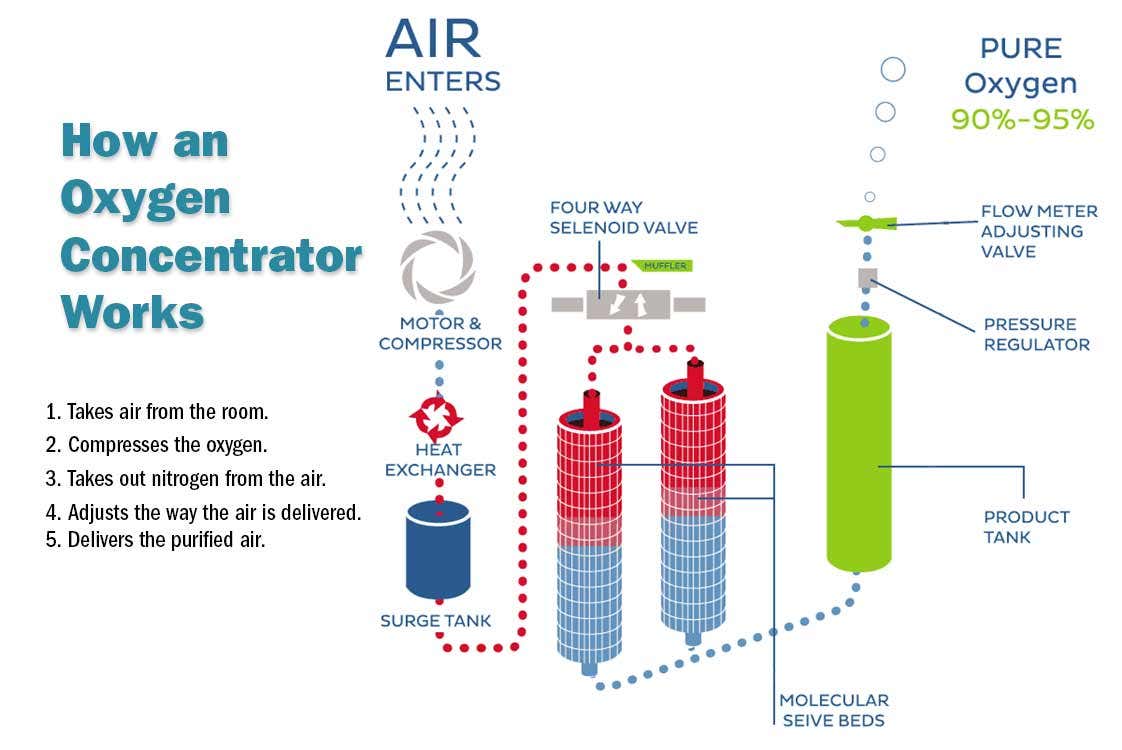 Is the Portable Oxygen Concentrator Good for Day and Night?

Portable oxygen concentrators have two settings for receiving oxygen: pulse dose and continuous flow. The pulse dose mode is usually used for daytime use, as it delivers air via the cannula when you inhale. Concentrators with pulse dose technology also are more compact in design and offer a longer battery life.

The continuous flow mode delivers a constant air flow via the tubes. For people who need oxygen while they sleep, this mode is the best option.