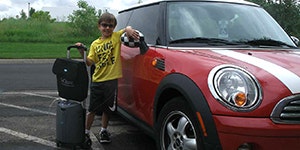 Cooper Anglemyer is a 6-year-old who has required supplemental oxygen therapy from birth. Born prematurely at 26 weeks; Cooper weighed only one pound, eight ounces. His first six months were spent in neonatal intensive care, where hospital expenses quickly reached the two million dollar insurance coverage maximum. When his medical insurance no longer provided coverage, Medicaid covered his final two months before he could finally go home.

Cooper now suffers from a chronic lung disease that requires constant oxygen and a full-time nurse to monitor his oxygen levels. Cooper and his mom came into the AMSR showroom in the hopes of trying out different portable oxygen options. The SeQual eQuinox was a perfect option for Cooper because it is the lightest weight concentrator that can maintain Cooper’s oxygen needs. When Cooper tested out the machine it worked beautifully, but unfortunately Medicaid would not cover the cost of this device. After hearing about Cooper’s precarious situation, Chart Industries and AMSR teamed together and donated the eQuinox to Cooper.

“We are thrilled to be able to make this donation,” said Cindy George, Marketing Manager at American Medical. "Cooper is a true inspiration," she said, "It was time to give back, and we wanted to help out his family."

Chart Industries has been a long time partner with AMSR in ensuring patients get the medical oxygen they need. Once we relayed Cooper’s story to Chart, they did not hesitate. Within a week, Cooper had a brand new eQuinox with two batteries providing him with nearly eight hours of freedom.

“Cooper will no longer have to worry about hitting his head or other children tripping over his tubing and instead he can focus on his dream of becoming a scientist and a teacher!” his mother said.

About American Medical:
With more than 20 years experience in the industry, they are one of the largest web-based providers of oxygen concentrators. AMSR provides the highest quality service available. Their mission is to help the customer get the best product for the best value when renting or buying an oxygen concentrator, as well as by providing the best on-going customer care.

They are home to one of the largest inventories of portable and home oxygen concentrators as well as CPAP Machines. Additionally, the American Medical is accredited by the Better Business Bureau with an A+ rating.