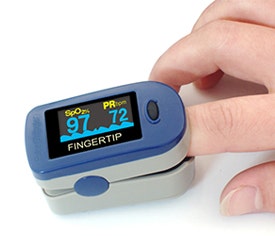 Pulse oximeters come in a variety of styles and accuracy levels. The entry level is considered a "sport" model, is battery operated and will provide a patient a reasonable indication of their oxygen saturation, but is not sufficient for intensive medical monitoring. Higher end models provide more accurate readings and include more sophisticated user interfaces and monitoring capabilities.

Pulse oximetry uses a light emitter with red and infrared LEDs that shines through a reasonably translucent site with good blood flow. Typical adult/pediatric sites are the finger, toe, pinna (top) or lobe of the ear. Infant sites are the foot or palm and the big toe or thumb. Opposite the emitter is a photodetector that receives the light that passes through the measuring site. 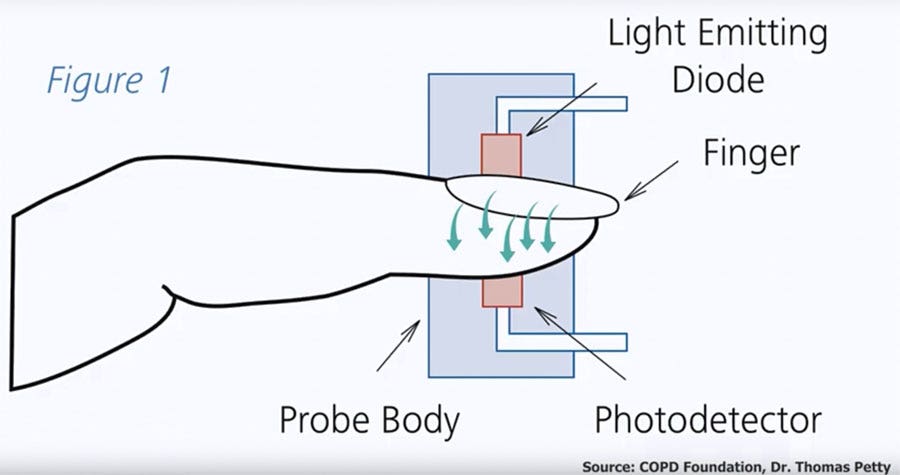 After the transmitted red (R) and infrared (IR) signals pass through the measuring site and are received at the photodetector, the R/IR ratio is calculated. The R/IR is compared to a "look-up" table (made up of empirical formulas) that convert the ratio to a SpO2 value. Most manufacturers have their look-up tables based on calibration curves derived from healthy subjects at various SpO2 levels. Typically an R/IR ratio of 0.5 equates to approximately 100 percent SpO2, a ratio of 1.0 to approximately 82 percent SpO2, while a ratio of 2.0 equates to 0 percent SpO2.

At the measuring site, there are constant light absorbers that are always present. They are skin, tissue, venous blood, and arterial blood. However, with each heartbeat the heart contracts and there is a surge of arterial blood, which momentarily increases arterial blood volume across the measuring site. This results in more light absorption during the surge. If light signals received at the photodetector are looked at 'as a waveform,' there should be peaks with each heartbeat and troughs between heartbeats. If the light absorption at the trough (which should include all the constant absorbers) is subtracted from the light absorption at the peak then, in theory, the resultants are the absorption characteristics due to added volume of blood only; which is arterial. Since peaks occur with each heartbeat or pulse, the term "pulse oximetry" was coined. This solved many problems inherent to oximetry measurements in the past and is the method used today in conventional pulse oximetry.

Key Specifications for a pulse oximeter are as follows:

Video: How to Use a Pulse Oximeter