Overview of Oxygen Tanks or Cylinders

The air we breathe at standard atmospheric conditions contains 21% oxygen and 79% nitrogen (with some trace gases). However, compressed oxygen gas is 99.5% pure oxygen. Manufacturers extract oxygen from the atmosphere and compress only the oxygen gas molecules, then fill up aluminum tanks until they reach about 2,200 pounds per square inch (PSI) of pressure. For comparison, the air pressure in a standard sedan automobile tire is about 40–44 PSI, so oxygen tanks are under considerably more pressure.

When compressed oxygen gas is released from a portable oxygen tank, the high pressure inside the tank forces oxygen outward. The release of pressure creates the oxygen liter flow that travels to your desired oxygen delivery device (such as a nasal cannula or oxygen mask). 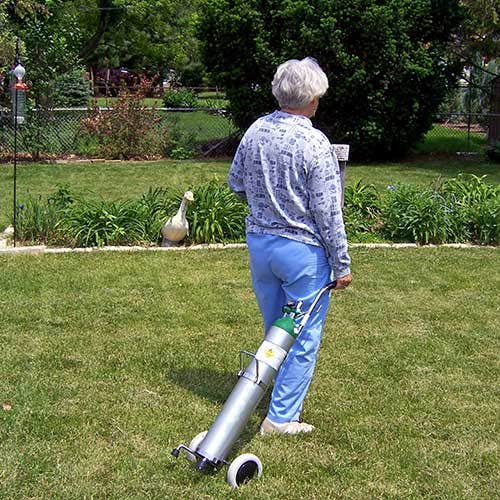 Most patients are not prescribed liquid oxygen for a new diagnosis. Liquid oxygen is generally impractical for short-term use due to the extra equipment and training needed to use it. However, the reason liquid oxygen is still a reasonable long-term option is that it is cheaper and less bulky to store, even though liquid oxygen poses some additional challenges that still make it less desirable for daily use.

There are many different sizes of oxygen cylinders ranging from industrial to portable. However, the "E" tank is by far the most common.

The "E" tank is a 3-foot tall aluminum tank that weighs about 8 pounds and carries anywhere from 2,200–3,000 PSI of compressed oxygen gas depending on the manufacturer. If used continuously at 2 liters per minute, an "E" tank will last about 5–6 hours. While the "E" tank is still considered portable, it is too tall to be carried safely over a long distance, so it usually comes with a cart.

There are other tanks such as the behemoth "H" tank (which is not portable), or smaller ones such as the "C" and "D" tanks. While the "C" and "D" tanks are lighter in weight and come with convenient carrier bags, their total capacity to hold compressed oxygen is lower, meaning there is less oxygen stored in the tank overall. So while the "E" tank is less portable than the "C" or "D" tank and requires a cart to travel, the higher capacity of stored oxygen makes it the most balanced option for short-term use.

Flow regulators work by converting the units of pressure in your tank into a number measured in units of flow, namely, liters per minute (LPM). This feature is important because it will help you set a specific amount of oxygen for release, one that is prescribed by your doctor in LPM. Also, without a regulator, an open oxygen tank would merely release a massive amount of pressurized gas rapidly, which is quite dangerous.

There are 2 main types of regulators: continuous flow and pulse-dose flow.

Continuous Flow
If you are only using oxygen on an intermittent basis, you will most likely have a continuous flow regulator. These regulators allow you to set the LPM as prescribed by your doctor and will keep that same level of oxygen until the tank either runs out or is shut off manually.

Pulse-Dose Flow
Pulse-dose flow regulators are a bit more sophisticated. With a pulse-dose regulator, you can increase the effective capacity of your portable oxygen tank by as much as 6 times. The regulator does this by only releasing short bursts of oxygen when you inhale, so there is less waste of oxygen when you exhale. You can still set the prescribed LPM in the same way as a continuous flow regulator.

The Challenges with Portable Oxygen Tanks for Long-Term Use

Portable tanks are a great solution for short-term use, but patients who need oxygen for longer periods may come across significant challenges:

Changing Out Tanks
With a 5–6 hour lifespan, portable "E" oxygen tanks will not last long if used continuously. If you need continuous oxygen, you could get a pulse dose regulator to extend the life of your tank, but you are probably still looking at changing out tanks every other day.

Fire Hazard
Oxygen under pressure is a fire hazard. While oxygen in the atmosphere is merely a catalyst for fires, compressed oxygen causes materials (that would not otherwise burn) to catch fire more easily. So when storing tanks in your home, it is essential to keep them away from any source of sparks, heat, or flame.

Cost
Portable oxygen concentrators are generally more expensive up front, but portable tanks will continue to cost money until you stop using oxygen. If you need continuous oxygen, the cost to use tanks could end being much higher in the long run.