Close
Close
Close
A home or stationary oxygen concentrator is a medical device that delivers medical grade oxygen (greater than 88% pure oxygen) to a patient via either a nasal cannula or mask. 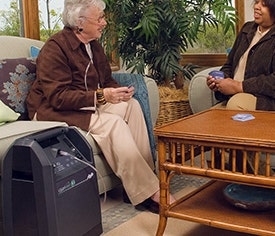 Oxygen Concentrators are medical devices that deliver medical grade oxygen (greater than 88% pure oxygen) to a patient via either a nasal cannula or mask. Air generally contains mostly nitrogen and only about 21% oxygen. Concentrators remove the nitrogen and "concentrate" the oxygen. Oxygen concentrator output is generally measured in LPM (liters per minute).

A concentrator has two cylinders filled with zeolite which selectively adsorbs the nitrogen in the air. In each cycle, air flows through one cylinder at a pressure where the nitrogen molecules are captured by the zeolite, while the other cylinder is vented off to ambient atmospheric pressure allowing the captured nitrogen to dissipate. Typical units have cycles of around 20 seconds, and allow for a continuous supply of oxygen at a flow rate of up to approximately 10 liters per minute (LPM) at concentrations anywhere from 25% to 95%. This process is called the pressure swing adsorption(PSA) cycle.

Key specifications for an oxygen concentrator are as follows: