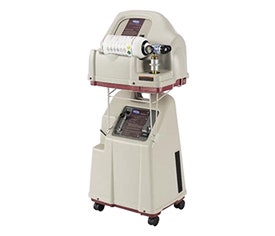 Oxygen therapy assists individuals suffering from a variety of conditions. People with chronic conditions such as COPD benefit from supplemental oxygen. Oxygen therapy not only increases physical stamina, but also aids with mental awareness, and even helps with sleep difficulties. Other conditions treated with home oxygen therapy include asthma, cystic fibrosis, and sleep apnea.

Home fill systems use pumps that rely upon an oxygen source. Compressed oxygen gas and liquid oxygen are two sources of oxygen. In either case, oxygen is stored in metal cylinders, of various sizes. However, liquid oxygen tanks require specially designed insulation, since in its liquid form, oxygen is very, very cold.

Liquid oxygen home fill systems rely upon oxygen gas cooled until it goes into a liquid state. This set up works out well for active individuals who want to get out and do more things. The tanks are easy to take along on outings, because the volume of the oxygen is so much smaller. Additionally, one tank can last for at least several hours.

Another home fill option is the oxygen concentrator. These devices require electricity to run, and are a little larger the liquid oxygen pumps. However, they do away with the need for having oxygen delivered, in any form, since they use air to make oxygen. These devices concentrate oxygen out of the regular air in the home over a period of hours and compress it into metal cylinders.

Both home fill systems require getting into a refilling routine. Using a concentrator requires regularly filling up empty tanks. The units can be noisy, and may lead to higher electricity bills.

However, this must be balanced against never needing regular cylinder deliveries. Liquid oxygen systems require less of a refilling routine, and can be used as the home unit as well. However, it does require frequent refilling, especially since in its liquid form, oxygen easily evaporates.