Close
Close
Close
A nasal oxygen tubes, or oxygen cannulas is a piece of equipment that delivers additional oxygen or airflow to individuals who need help breathing. Patients might need supplemental oxygen for many reasons, such as during surgery and in certain respiratory conditions. But it’s not always necessary to wear a full oxygen mask to get extra oxygen. For instances where constant and consistent oxygen delivery over 10 LPM isn't needed, a nasal cannula can help deliver air flow. 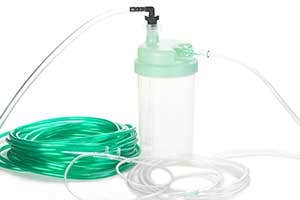 A nasal cannula is a device that consists of a plastic tube that fits behind the ears, and a set of two prongs that are placed in the nostrils. Oxygen flows from these prongs. The tubing is connected to an oxygen tank, a portable oxygen generator or a wall connection in a hospital via a flowmeter. Unlike an oxygen mask, the nasal cannula consists of a small, soft plastic tube that is divided into two prongs on one end. The prongs are placed in or under the nostrils and secured to the user by hooking the tube around the ears or with an elastic band. The other end of the tube is attached to an oxygen supply such as an oxygen concentrator or tank.

The nasal cannula carries 1 to 5 liters of oxygen per minute. There are also infant or neonatal nasal cannulas which carry less than one liter per minute. (These also have smaller prongs.) The oxygen percentage provided to the patient ranges roughly from 24 to 35 percent, or the cannula may merely supply humidified air.

The average adult consumes around 7 or 8 liters of room air every minute while resting. Room air is usually made up of about 20% oxygen. If a person needs a little more air or oxygen, a nasal cannula might be used to deliver supplemental oxygen at higher percentages of up to 95%. 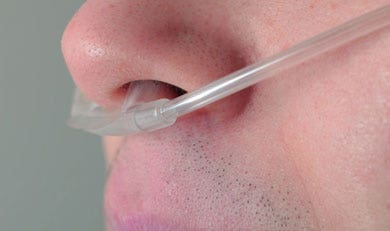 Most tubing can deliver up to 5 liters of oxygen per minute, which is the maximum amount of air flow that most people can handle comfortably. Too much supplemental oxygen can lead to dryness and nosebleeds. It’s also difficult to deliver more than 6 liters of air per minute because the additional airflow tends to "spew over" and only remains as active as producing 5 or 6 liters per minute.

Patients who require oxygen to self-respirate take air through a mask. Cannulas are frequently used with patients who might benefit from oxygen therapy but don’t have to have oxygen to breathe on their own. Stroke sufferers and other individuals who are impacted by vasoconstriction are examples of people who can benefit from oxygen delivered by nasal cannula. Special cannulas are installed in small, unpressurized aircraft to be used by pilots and passengers to boost oxygen levels during high altitude flights.

Traditionally, a high flow of oxygen can deliver highly accurate oxygen concentrations, but it is uncomfortable and inconvenient for many patients. Recently, humidifiers have started being used in conjunction with cannulas to help alleviate dryness, and wider tubing can be used to carry more than 6 liters of air per minute without drying out the nasal passages and reducing the incidence of nosebleed and asthma in patients. By humidifying respiratory gas, patients can receive high air flow volumes comfortably through a nasal cannula. This also frees up patients to eat, drink and continue other activities without being deprived of oxygen.

Complete the fields below to receive Fall Sale Pricing!