Close
Close
Close
Tuberculosis, or TB, is caused by the Mycobacterium tuberculosis bacterium. While usually a disease of the lungs, it can also affect other parts of the body. Transmitted through the air, if often comes from an infected individual’s cough or sneeze. Several diagnostic tools help identify the disease, and treatment involves use of medications including antibiotics.

Tuberculosis, or TB, is an infection caused by a bacterium called Mycobacterium tuberculosis. It has been around for a long time. According to Rutgers University, Egyptian mummies from 2400 BCE showed evidence of TB in their spinal columns, and the ancient Greek scientist Hippocrates identified it as an illness called Phthisis. In more recent history, TB was once a leading cause of death in the United States.

Most think mycobacterium tuberculosis only affects the lungs. However, it sometimes spreads to the lungs, spine, kidneys, and even the brain. TB mortality rates were once quite high, but modern treatments cure many. Unfortunately, due to lax medication regimes and other factors, some strains of TB are “MDR TB”, or multidrug-resistant tuberculosis, which is much harder to treat.

Tuberculosis is transmitted through the air, often from another’s cough, sneeze, or conversation. According to the CDC, tuberculosis symptoms include: 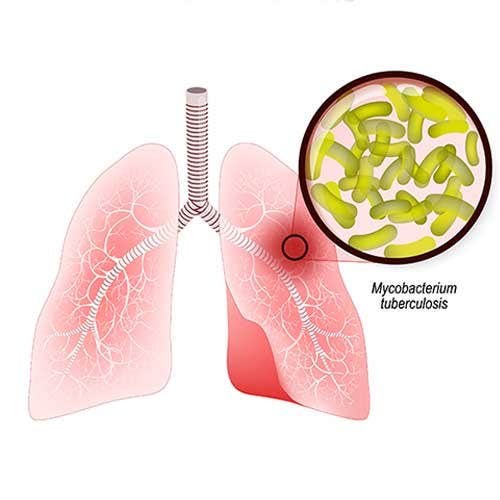 People with weaker immune systems are more susceptible to TB. For a long period, the only means of diagnosing tuberculosis was something called a Tine test, which uses an instrument with minute spikes that pricks the skin, introducing a small amount of TB antigen under the skin. Another skin test, the tuberculin skin test, or the PPD test, has a better diagnosis rate.

There are now blood tests for detecting tuberculosis. However, the CDC reports that these interferon-gamma release assay (IGRA) tests for TB infection cannot identify latent TB from active TB. Instead, they must be used as one of several tools in the diagnostic process.

Latent TB occurs when an individual has TB but exhibits no symptoms. Some refer to latent TB as “sleeping” TB. Some with latent TB may test positive for the disease, yet have a clear chest x-ray. In this stage, TB is not transmissible to others, and those with latent TB who take the right medications may stave off active infection.1 Once TB is active, it is contagious.

Latent or active, tuberculosis requires prompt treatment. With early and continual treatment over an extended period, TB is curable. Treatment sometimes last six to 12 months, and may involve multiple medications.

Treatment of latent tuberculosis generally consists of treatment with specific drugs such as isoniazid, rifampin, and rifapentine. Treating active disease is more difficult, involving additional drugs taken over a more extended period. Anyone receiving treatment for TB must keep in mind the importance of taking medications as scheduled, for the entire period prescribed. Failure to do so causes illness relapse, spread of the disease to others, and development of TB strains that are resistant to regular TB medications. The drugs required to treat resistant TB strains have much more severe side effects, and usually require a longer course of treatment.

However, for those who adhere to treatment protocols, their long-term outlook is good.

The information on this page is not intended to be a substitute for professional medical advice, diagnosis, or treatment. For more information about tuberculosis, talk to your doctor or primary care provider.