Close
Close
Close
Lung cancer diagnoses strike over 224,000 people each year. Lung cancer typically forms within the lungs’ air passage linings, and often first presents as chest pain and a persistent cough that never abates. Many people develop severe shortness of breath as the disease progresses. Smoking is the leading cause of lung cancer, although genetics and exposure to other harmful chemicals may play a part in some cases. While radiations, surgery, and chemotherapy remain the most common treatments, recent developments give hope for new, more effective ways to deal with this disease.

Lung cancer affects the lives of many thousands of people. It strikes one of the body’s most vital functions. With each breath, the lungs fill with air and the body takes in vital oxygen. Each exhale dispels carbon dioxide.

The number of annual lung cancer cases is quite daunting. In just 2014, close to 160,000 people died from lung cancer. Another 224,210 were diagnosed with the disease.1 Lung cancer remains one of the most common and deadliest cancers in the world. 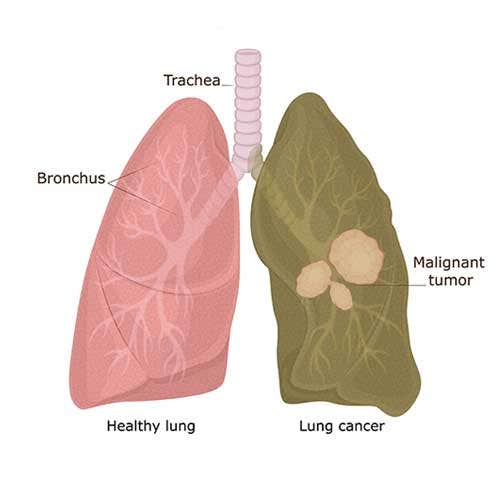 "Small cell" and "Non-small cell" actually describe the relative appearance of how the two types of lung cancer look under when magnified under a microscope.

The symptoms of lung cancer vary from person to person. Chest pain and a cough that does not go away are two of the more common symptoms. Many also experience shortness of breath and wheezing. In some cases, patients cough up blood, while others just do not feel good. They may also have swollen lymph glands. Having repeated bouts of pneumonia is another warning sign. When the cancer spreads beyond the lungs, or metastasizes, people may feel extreme fatigue and have unexplained weight loss.5

Cigarette smoking remains the most common cause of lung cancer. However, not all lung cancer victims smoked. Nonetheless, smoking is implicated in about 90 percent of lung cancer cases in the United States.6 The good news is that when smokers quit the habit, their chances of developing lung cancer decrease.7

Lung cancer survivability depends upon the cancer’s stage at the time of detection. For non-small cell lung cancer, health professionals use a staging system from “Hidden,” where cancer cells show up in sputum but imaging and bronchoscopy testing show no tumors, to Stage IV, involving tumors in both lungs, with spread of cancer throughout the body.8