Close
Close
Close
Cystic fibrosis (CF) occurs due to a genetic defect, and causes the body to produce thick, sticky mucus. People with CF often have difficulty breathing and are prone to lung infections. The disease also affects other parts of the body. There is no cure for Cystic Fibrosis. However, people with CF now live for longer periods.

Cystic fibrosis (CF) occurs due to a genetic defect. The affected gene produces a protein involved in transferring salt and water in and out of cells. The presence of the genetic defect makes the protein is less effective, leading to the production of overly sticky, very thick mucus. Individuals with Cystic Fibrosis inherited a defective gene from each of their parents. Many adults carry the defective gene and live with no symptoms of the disease. However, should they have a child with another carrier of the defective gene, that child may be born with Cystic Fibrosis.

Thickened mucus causes many lung infections in addition to regularly clogging the lungs, making breathing difficult. However, Cystic Fibrosis affects other parts of the body, including the pancreas. The pancreas, a gland that sits behind the stomach, produces digestive juices that help break down food, and hormones control blood sugar levels. Cystic Fibrosis causes clogging of the pancreas so that it no longer produces necessary food digesting enzymes. The body cannot absorb enough nutrition as a result. Other organs often affected by Cystic Fibrosis include the liver, intestines, and sinuses.

Most people have no idea they carry the defective gene that causes Cystic Fibrosis. The initial symptoms of Cystic Fibrosis in a child born to two carriers include notable salty tasting skin, often discovered when giving the baby a kiss, and no stool passed by a baby when first born.1 Other symptoms vary widely, and often do not show up until children are a bit older, although some have severe Cystic Fibrosis from birth. 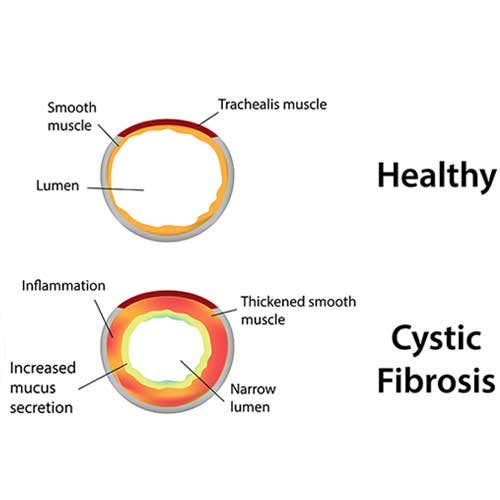 The information on this page is not intended to be a substitute for professional medical advice, diagnosis, or treatment. For more information about cystic fibrosis, talk to your doctor or primary care provider.