Close
Close
Close
COPD refers to a set of diseases that all involve compromised airflow and breathing function. Emphysema, certain types of asthma, and chronic bronchitis fall under the COPD label. Typical symptoms of shortness of breath, excess mucus, and chest tightness effect the estimated 13 million Americans suffering from COPD. Due to damage to the respiratory system, bronchial tubes, bronchioles and lung alveoli all lose elasticity in cases of COPD, which results in the death of over 130,000 people each year in this country alone. However, while there is no cure, treatments exist that prolong life, in addition to improving quality of life.

COPD is an “umbrella” term used to describe several diseases involving the restriction of airflow to the lungs.1 Several illnesses that cause problems with breathing and blockage of airflow fall under the COPD umbrella, including emphysema, chronic bronchitis and, in certain cases, asthma.2

Emphysema and chronic bronchitis have taken their toll for years, especially in middle age and older individuals. Of all the millions of people ever diagnosed in the U.S. with emphysema, an overwhelming percentage (over 90 percent) was above the age of 45. Furthermore, people over the age of 65 have the highest chronic bronchitis rates.3 In 2010, 134,676 people in the United States alone died from COPD. As of 2011, an estimated 13 million Americans had COPD. Unfortunately, the condition is likely underdiagnosed, meaning that the actual number of people suffering from it may be much greater.4 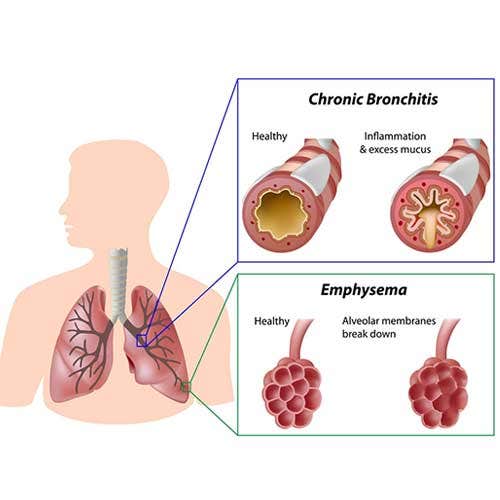 One of the most common first symptoms leading to a diagnosis of COPD is producing and coughing up excess mucus. Most people also experience a chronic shortness of breath. Other symptoms of COPD include a feeling of tightness in the chest, wheezing, and a tendency to catch colds or the flu repeatedly.5

In the human respiratory system, the windpipe leads into the lungs’ bronchial tubes. Those, in turn, branch out into much smaller tubes called bronchioles. At the end of each bronchiole are the alveoli, which are tiny, round air sacs. The sacs have capillaries running through their walls, which take oxygen into the blood running through them, while also discharging carbon dioxide for the lungs to exhale.

In a healthy lung, the bronchial tubes, bronchioles, and alveoli are pliable, elastic, and stretchy. With COPD, the elasticity of all those things decreases. Additionally, airways walls thicken, swell, and produce excess mucus. The Alveoli may also be destroyed. The result is less air flowing through the airways.6

The primary cause of COPD is smoking. Poor air quality, occupational exposures, socioeconomic status and even numerous childhood respiratory illnesses also play a part in the chance of developing COPD. In terms of genetics, AAT, or Alpha1 antitrypsin deficiency, causes a small number of emphysema cases (2-3%), mostly in people of northern European ancestry.7 Nonetheless, the true culprit, in most cases, is smoking.

Many people live with COPD.  While there is no cure, treatments can make life easier, including maintaining at least some regular activities, albeit such activities must be taken slowly. However, being aware of COPD triggers is very important. For many, avoiding conditions likely to worsen the condition plays a large part in averting emergencies.


Living a full life despite COPD requires attention to the health of the entire body. That means regular doctor visits, taking prescribed medications, and getting appropriate immunizations, such as the flu shot.9

The information on this page is not intended to be a substitute for professional medical advice, diagnosis, or treatment. For more information about COPD, talk to your doctor or primary care provider.