Close
Close
Close
Acute bronchitis is one of the top 10 medical conditions for which patients seek medical care. Its characteristic productive cough, shortness of breath, and chest tightness can be uncomfortable, but acute bronchitis, caused by the virus that also causes the common cold and the flu or by other lung irritants, lasts only a few days.

Acute bronchitis is an inflammation of the bronchial tubes, the passageways through which air travels to the lungs, and is one of two types of bronchitis—this type usually improves within several days or two weeks. Acute bronchitis is generally brought on by the same viruses that cause the common cold and the flu, which are spread through the air by coughing or through physical contact, or other lung irritants like smoke or air pollution. Bacteria can also cause bronchitis, but much less frequently. 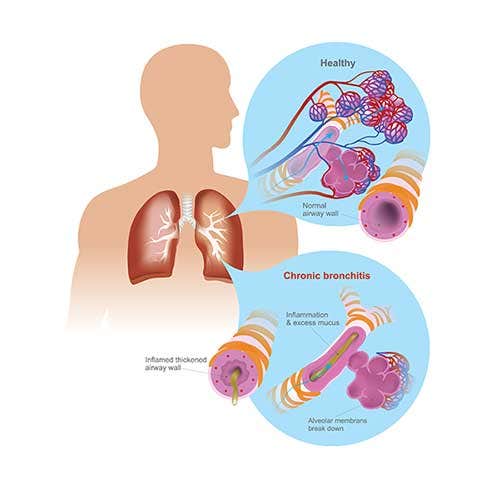 Although acute bronchitis and its symptoms may clear up in a relatively short amount of time, the cough can persist for up to eight weeks.

This infection is one of the top 10 medical conditions for which patients seek care; in 1998, approximately 2.5 million visits to U.S. physicians pertained to acute bronchitis. However, as it is most often caused by a virus or by other lung irritants, it will generally get better on its own. People suffering from a bout of acute bronchitis will generally miss two to three days of work, making this a somewhat expensive infection.2

Antibiotics are unnecessary for acute bronchitis, unless it is determined to be caused by bacteria or the condition is another respiratory infection. Treatment of acute bronchitis is typically symptomatic; sufferers can take over-the-counter pain relievers such as acetaminophen or ibuprofen to relieve any pain. Patients can also use a clean humidifier or cool mist vaporizer, or even breathe in steam from a bowl of hot water or a shower, to help ease the characteristic cough.

One of the best ways to prevent a case of acute bronchitis is to avoid smoking or second-hand smoke. Smoking irritates the bronchial tubes, and is a major cause of acute—and chronic—bronchitis.  Dust, fumes, vapors, and other types of air pollution also irritate the lungs and can heavily contribute to the development of acute bronchitis. In addition, washing your hands frequently can help minimize the risk of contamination by contact.3

As a respiratory infection, acute bronchitis is generally mild. However, if symptoms of bronchitis last longer than several weeks, it may be chronic bronchitis—a respiratory condition that should be evaluated by a doctor.

The information on this page is not intended to be a substitute for professional medical advice, diagnosis, or treatment. For more information about acute bronchitis, talk to your doctor or primary care provider.